I got a serious craving for what my family has always called Christmas candy. It’s kind of like coconut creme dipped candies. I got out the recipe card, went to the store for the ingredients, and started making it. The recipe calls for paraffin to be put in with the melted chocolate so it doesn’t melt in your hand so readily. I couldn’t find paraffin at the grocery store. In fact, the customer service ladies said they didn’t have it. Is that a specialty item?

Anyway, I was trying to make it as fast as I could. I made the insides in the KitchenAid mixer. That was way easier than stirring it myself. When I rolled the middles, my hands were a lot less sticky than usual, which was nice. I dipped them in the chocolate a little too quickly because they were still soft. It was a hassle, but not a serious problem. What was a serious problem is how HUGE I made the candy balls. It was only after I had dipped them and stepped back to survey my work that I realized they were twice as big as they should be. And I don’t know if it was because of the missing paraffin or what, but the chocolate coating was THICK!

So what I ended up with is not Christmas candy, but GIANT SUGAR BOMBS. I should hand them out to my kids at the end of each class to get back at those teachers who are always giving kids candy right before they come to me. hehehe 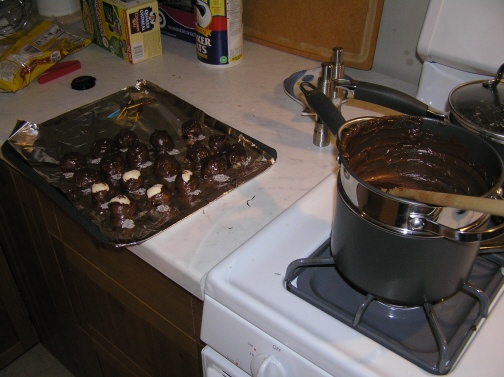 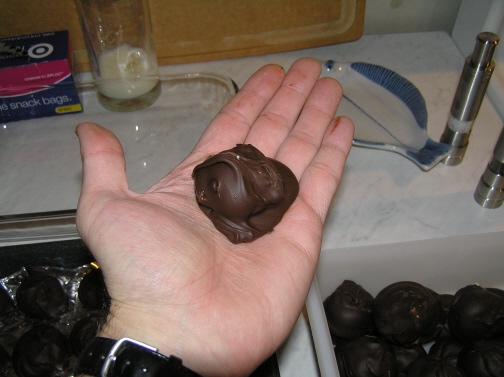