I got to the airport in Baltimore way before my flight. I had two hours to kill. I like airports, so I was looking forward to it. I had books to read, but was kind of hungry. There was a Wendy’s on Concourse C. Ehhxcellent! I would get a nice, greasy hamburger. Unfortunately, the line was really long. I had a lot of time to kill, so I waited. Also unfortunate was the fact that the woman behind me was an airport employee who was boasting about how she was on the clock still but that she was angry and so she was going to have lunch, then sit around, then clock out. I didn’t like her work ethic. I think it might have showed on my face, so I didn’t turn around.

By the time I got to the front, I was really hungry. I ordered a hamburger. The girl behind the counter said they were out of hamburgers. All they had was chicken sandwiches. What? No hamburgers at Wendy’s?!? And apparently, that had been true the whole dang time I was in line. Could they not have made an announcement? Or at least made a little sign on a placemat? Criminy!

After getting some food at another restaurant, it was time to board the plane. I sat on the runway for two and a half hours because it was raining north and west of the airport. Sheesh! Fortunately, by the time I got to Minneapolis, my connecting flight hadn’t left. I made it, and so did my luggage! But no thanks to BWI Airport. Stupid BWI with their stupid no hamburgers and stupid delays because of rain. 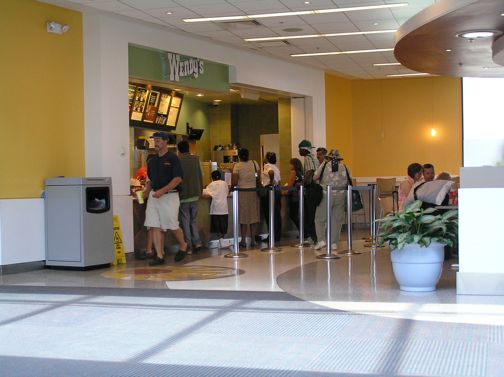