We ate at a Japanese hibachi grill restaurant last night. It was delicious. I was embarrassed that I could not catch a thrown shrimp in my mouth. The cook guy tried three times before he went on to the next person. After trying with everyone else, he tried me again, and on the fifth throw, I finally caught the shrimp. Geez!

I was keeping my eye out for the Japanese Illuminati. I didn’t suspect our server, but the family who sat at the table with us was mighty suspicious. The wife was Japanese, but the husband was white. What really caught my attention was his hair. He had a white spot on the top of his head. Was it a mark of his alignment to the Illuminati? And was that small person their son, or was it just a really, really small Japanese man? 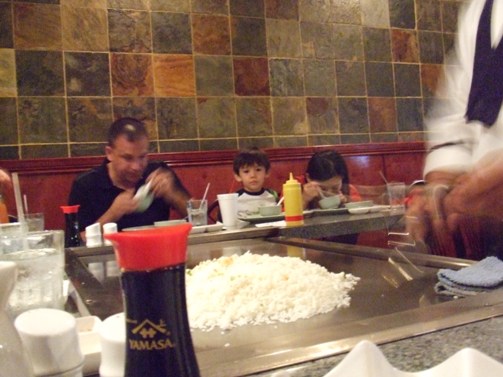 This entry was posted in Investigations. Bookmark the permalink.