It was time once again for the selection of the eighth grade verse. As always, there were some pretty strange suggestions. But also as always, the kids ended up choosing a great verse. They voted for Philippians 4:13 – “I can do all things through Christ who strengthens me.” The person who suggested the verse wrote this version of it, which happens to be the New King James Version. All the other versions say “…Him who strengthens me.” I like that this says “Christ”.

Unlike 2008 and 2007, I didn’t come in on the weekend to do the bulletin board in the hallway. I did it after school on Monday and before school yesterday. It was done in time for the kids to see it when they came in at 7:30am.

Today I’ll be doing a chapel based on their verse. I’m going to talk about various superheroes (with pictures) and where they get their powers and what their weaknesses are. I’ll compare them to us and where we get our power and what our weaknesses are. 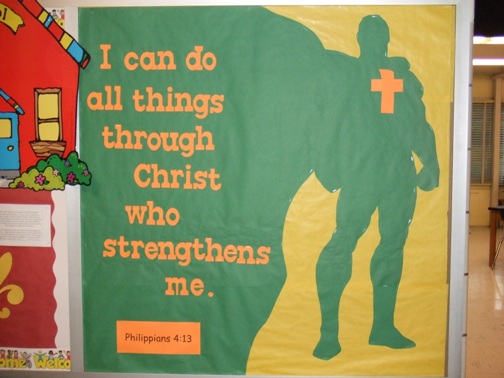