On trash day, I used to put trash out in the morning, but then I missed the truck a couple of times, so now I do the night before. This past trash day, I was a little worried, because there was a big bag of crab shells in the can. I had been keeping them in the freezer, which is what I usually do with trash that might stink or rot. But the crabs would be sitting out all night. Would anything get into them?

As I walked to my truck in the morning, I noticed that my trash can was empty. I took it back to my porch and started to leave for school. But then I noticed that none of my neighbors’ trash was gone. And then I noticed that mine wasn’t either. It was across the street next to another big pile of trash bags. I thought maybe an animal had gotten into the bags, but nope. I think a human did this. But why? Is somebody stalking me and wanted to rustle through my trash? Were they testing the limits of the sanitation workers’ willingness to take a super-large pile of trash?

Whatever the case, I’m very glad the trash was all taken. Old crab shells really stink. And though it’s been pretty cool out lately, it’s not freezer-cool. 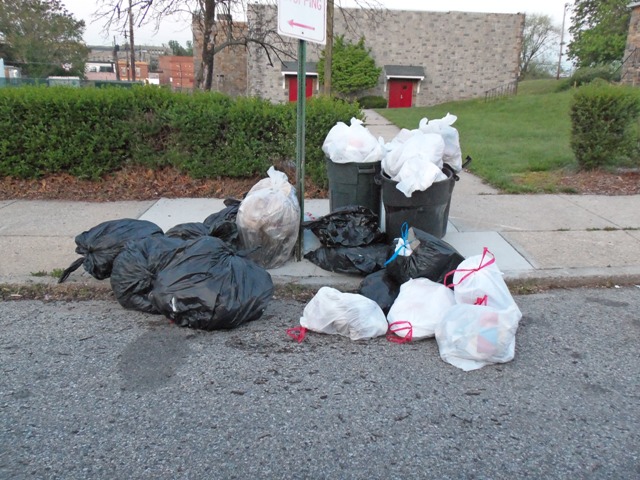 This entry was posted in Investigations. Bookmark the permalink.

5 Responses to A Trash-Taking Mystery