Yesterday was my last day in Orlando. I started the day by going to a breakfast cafe with Chris and Beth. It was delicious. I ordered pancakes. They were humongous! I only ate about a fourth of what was there.

After that, we went to the Albin Polasek Museum and Sculpture Gardens. We went there because I wanted to see some Florida garden plants, and Beth said this is a place she drives past almost every day, but has never been to.

It was cool. The site is the artist’s house and garden. When he died it was converted into a museum. The garden is also a place people have events like weddings. The garden was beautiful. There were many colorful flowers, but I was interested in the things I don’t normally see in Maryland, like Spanish moss and bark with thorns on it. 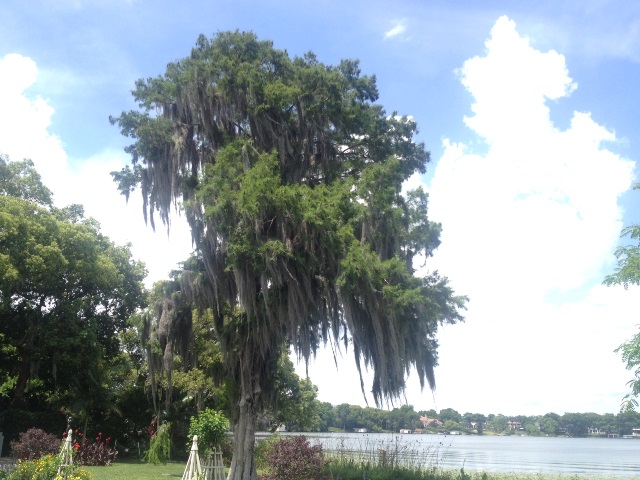 Big trees with moss are all over the place down there.

The museum tour was really good. The docent was very engaging. Albin was mostly a sculptor. I liked his stuff. A lot of it was Christian-themed and was done for his home congregation. This one is called “Victorious Christ”:

Beth is for scale

There was also a statue of Mary in the collection. The artist put a corn cob in her hand to acknowledge the hard work of corn farmers. He called it “Our Lady of Corn”, but it ended up being called “Our Lady of Nebraska” by the church. Here she is for all our Nebraskan readers:

This is plaster. The one he made for the church is marble.

I couldn’t go up to the balcony, but you can kind of see the corn cob held close to her heart.

My flight home was uneventful. It was nice to spend some time with Gus. Then I went to bed early. I have some work to do today before school starts and I needed my rest.