This is the week I’m supposed to get back to work on the porch. I have a few more things to do before the boards can get screwed down.

The first order of business was straightening a joist. One of the old joists had a serious curve in it. In order to straighten it, I needed to put blocks of wood between several joists, so there was a super-block pushing against the warped joist.

Karl lent me a small jack, I jacked the joist straight, and put the final block of wood in. Success! The joist was straightened! 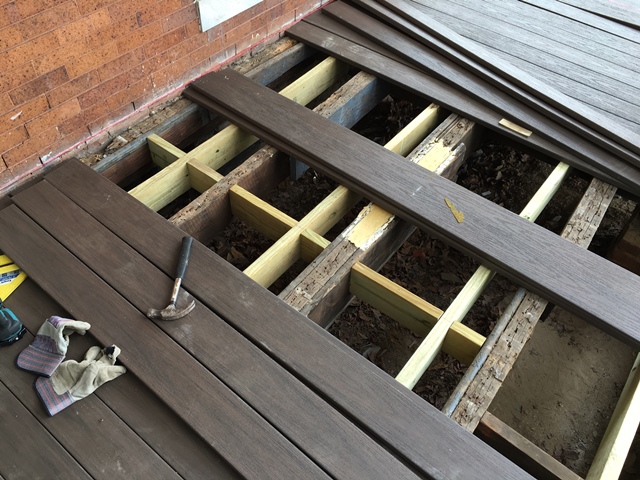 The curved joist was the one against the house.

The second order of business was to get going on the railings. The posts for the railings will be attached to the undercarriage of the porch, and the floor boards will be cut around them, so I have to get those posts installed.

I have decided to go with Trex railings. They are synthetic, so they don’t have to be painted and they will last a long time. They are also available at Home Depot, which is nice. I could go and see them in person. The posts were easy to find, but the railings were a little confusing. Trex makes three lines of railing. I decided I like the look of the “Transcend” line, but they weren’t at home depot. I will have to special-order them.

Last night I did a lot of research and calculations. These railings are going to be expensive.