Last night I was looking for some software on my computer desk at home and stumbled across the picture below. I don’t know why it’s on my computer desk. The back of it says: “Pacific Hills Church Omaha – Spring 1992” It’s written in my grandma’s handwriting.

Oddly enough, I remember the moment this picture was taken. I was singing with my college choir at a church in Omaha on Sunday morning. My grandma came to hear it because she was so close by in Arlington. She didn’t particularly care for my haircut.

Later in college, a couple of times when we were bored, we did something weird to our hair. One time we dyed it jet black (I think the color was called ‘Blue Black’). That was me and John. And one time we shaved it all off. That was me and Samith. We let Lloyd and Lauren cut it off as an engagement present. Samith ended up looking like Gandhi. I ended up looking like a grandpa. In fact, when I would whip this picture out later, I would say, “Look! A picture of my grandpa and grandma!”

I only wish I had as much hair now as I had then. But at least I don’t have the giant forehead zits. Oh… wait… 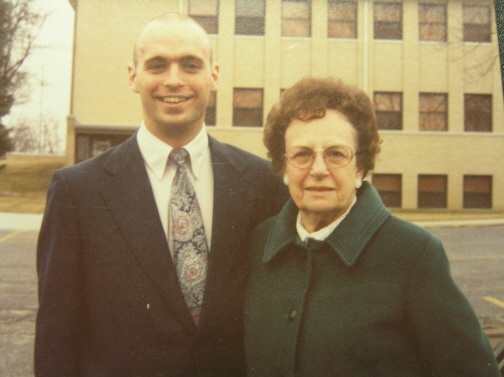