Yay! Happy Birthday to me! I am 38 this year. Two curvy numbers. It is also 2 to the fifth.

I went to the grocery store last night to get some new fruits and vegetables for my Lenten Sacrifice Project. I ate some old carrots yesterday, and they were kind of slimy. My stomach didn’t feel so good after I ate them. So I got a TON of fresh tasty things. I hope they don’t go bad before I eat them. That’s the problem with fresh foods. Where are all the preservatives?

While walking through the produce aisle, I saw some apples in plasic containers. Being curious, I read their labels. They were called “GrÄpples” (the package says “Say Grape-L”). The claim was that they looked like apples but tasted like grapes. I sniffed them, as I am wont to do. They smelled like grape Kool-Aid! Hee! Of course, I bought a pack of them.

Further reading of the label says they are McIntosh apples that are bathed in artificial flavor. I was a little disappointed. I wanted to be eating something that was genetically modified. But still, they taste like grape Kool-Aid! How cool is that? 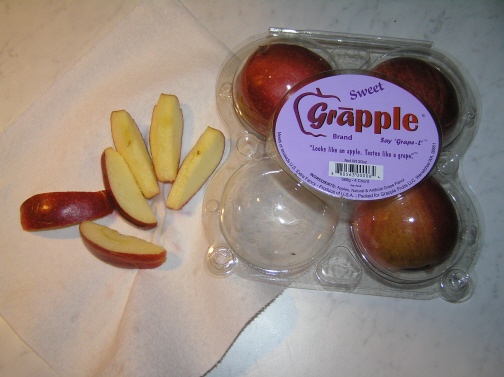