Denis wasn’t kidding about having to get up early yesterday. We were in a taxi by 4:30am, headed for a place called St. Pancras. It was a train station. After a sleepy ride we got off in this city: 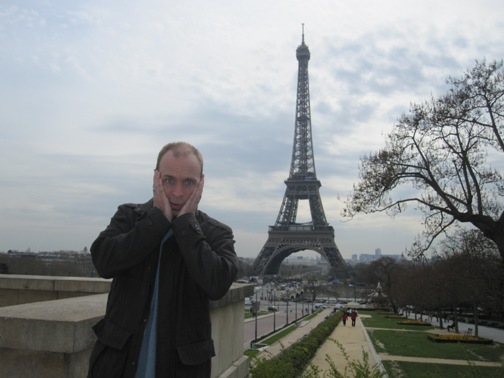 We were in Paris!

The Eiffel Tower wasn’t our first stop, but it was pretty cool. You can stand directly underneath it. The lines to go up were crazy long. We didn’t have time.

The actual first stop was the subway ticket counter. We got an all-day pass. Denis has an application on his iPhone that shows you how to get from place to place on the Metro in Paris. It was awesome. And thus began our marathon to visit many major Paris landmarks.

Our first landmark was the Pantheon. We didn’t know what it was, but it was on the map as an attraction. It turned out to be a very cool building that has many famous dead people buried in it, including Victor Hugo, Marie Curie, and Voltaire. I don’t know much about Voltaire, but I’m always quoting a philosophy of his: “I disagree with what you are saying, but I will defend to the death your right to say it.” 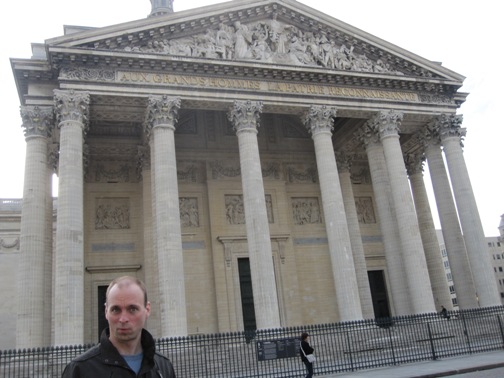 Next we went to Notre Dame. I couldn’t believe how ornate the building was. Outstanding! We could have spent hours there, but there wasn’t time. We did go inside. It was free. 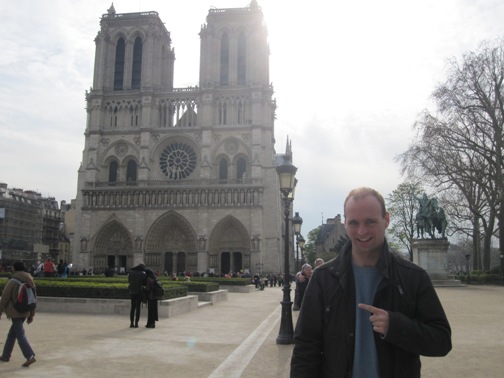 The inside of the church was beautiful. There were many vignettes, chapels, and displays around the sides of the church. There was even a St. Denis – spelled the same way as Denis! I had to get a picture. 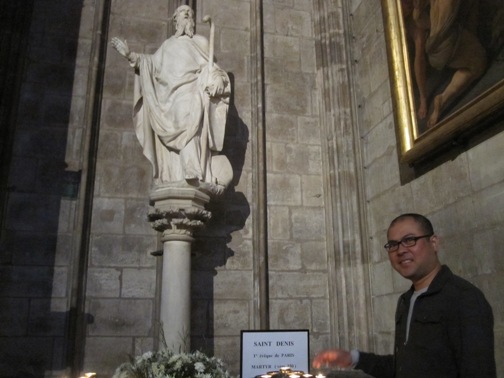 Next stop was the Musee d’Orsay. I had no idea what this building was, but it was cool-looking. A quick internet search tells me it has lots of Impressionist art in it. 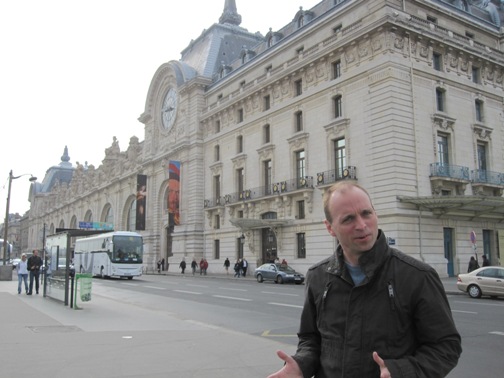 Next stop was the Eiffel Tower. I’ve already showed that. But by this time, we really needed a bathroom. Here’s something interesting: London has public toilets, but no public trash cans. Paris has public trash cans, but no public toilets …except for a couple at the base of the Eiffel Tower. The line was long. It was a robot bathroom that cleaned itself after each use, so it took forever. 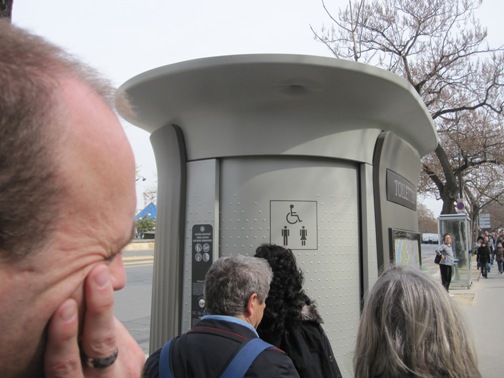 After the Eiffel Tower, we headed for the Arc de Triomphe. It’s in the middle of a giant traffic circle, so you have to go underground to get to it. It’s a war monument. Very cool. The statues on the sides of it are giant. I’d like a statue like that in my garden. 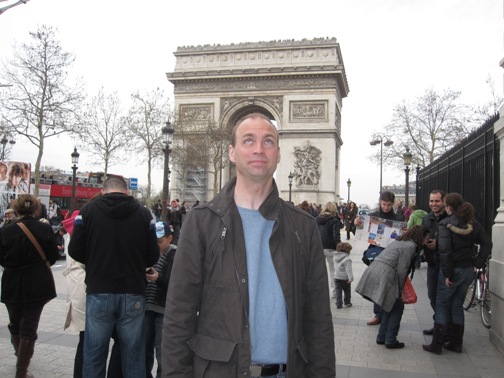 The Louvre was next. It was a HUGE complex of buildings. If we had wanted to actually go in, I think we could have spent several days there. We only spent about half an hour walking around and looking at all the pretty buildings. I did not see any members of secret societies there. 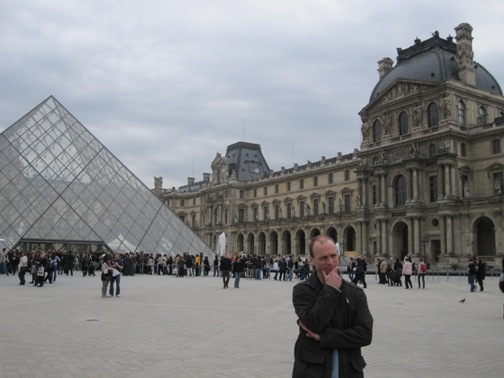 By this time we were starving. But how were we going to get food in a city where everybody speaks French? Denis was really brave and went into a restaurant and said: “Parlez vous Anglais?” to the woman. She said: “A little.” She was Chinese. We were at a Chinese restaurant in Paris. Ha! How’s THAT for weird food, Lauren? 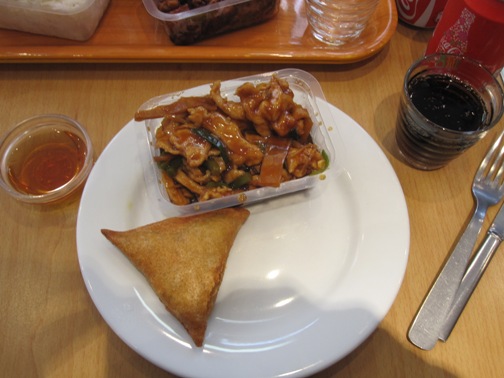 By now, we had run out of major landmarks. Oops! We were also getting tired. We stumbled upon a shopping mall. It was really fun to go there. Everyone was shopping just like Americans do: hold up a shirt, look at the price tag, put it back. It was surreal: we were hanging out in a shopping mall in Paris! We also stopped at some other stores. At one of them, I got a shirt. It was only ten euros. Denis got it for me while I took a picture: 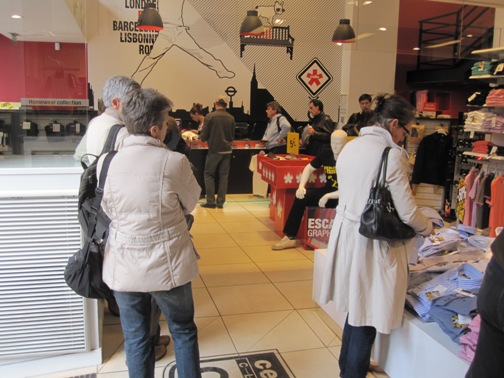 Our train for London left at 8:30pm, but we were exhausted. We decided to wait in the train station. It was incredibly uncomfortable. But at least we weren’t walking any more. Whew! To pass the time, we bought some pain. Ha! That’s what they call bread! I had “pain aux raisins”: pain with raisins! Hehe… 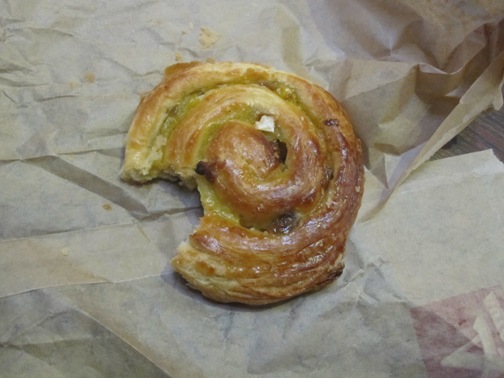 The trip back was uneventful, and we were back to the hotel by 10pm. I was so… tired…

Here are some quick reflections on Paris: *Finding a bathroom can be hard. *It’s easy to pretend like you know French, as long as you don’t have to speak to or listen to anyone. *Paris subways are less clean and less polite than London subways. *The people in Paris are better-dressed than any place I’ve been. *If a tan-skinned girl in a head scarf asks if you know English, say “no”. She’s asking for money. I must’ve been asked by ten or fifteen different girls. After the first time, I knew I should just say “no”.

12 Responses to Day Three: Not London