I had two brushes with death yesterday.

The first went like this: I was working behind Lloyd and Lauren’s house when I heard a loud crash. I looked over to see a huge tree limb had fallen from their giant oak tree. If I were only thirty yards to the right, that branch would’ve fallen on me! I could have died! …unless my ninja reflexes would have caused me to step aside just in time. 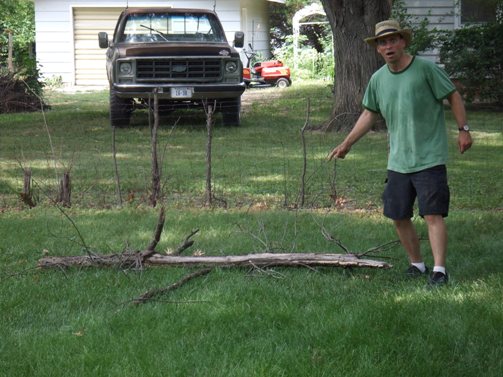 The second brush with death is ongoing. I was pulling weeds from behind Harold and Beth’s neighbor’s garage yesterday. It was dirty work, but the area looks nicer now. And I feel good that I did something for them in return for them giving me something I wanted. What I didn’t count on was getting a poison ivy rash. I didn’t notice it until I was getting ready for bed. I tried to put something on it to keep it in check, but Lloyd and Lauren seem to be pretty low on first aid materials. I found one bandage, and some tree-hugger, non-steroid, anti-itch cream.