Denis saw that there was a barbecue festival in Belair yesterday and wanted to go. Since it was up by Peggy, we asked if she wanted to join the fun. She did. The festival was fun. The focus was, of course, food. I was glad to see that they had lemonade there… you know the kind where they squeeze a lemon into it and put a bunch of sugar in and shake it? It was awesome. The barbecue was good too, but I could have made a meal of just lemonade. I should try that sometime.

After we left the festival, Peggy suggested we visit Rocks State Park and see the King and Queen seat. It’s a 190 foot high cliff that was purportedly used for indian ceremonies. You can drive right up to where it is, then a short walk gets you to the cliff. And then you can walk to the edge. There is no railing, no wall, no rope or chain… just the cliff and empty air. Denis went almost all the way out to the point. Peggy walked calmly to the narrow area. I stayed behind. I’m afraid of heights.

But I was determined to go out farther. Denis and Peggy cleared out while I inched my way along. Here’s as far as I got before my legs felt like they might give way: 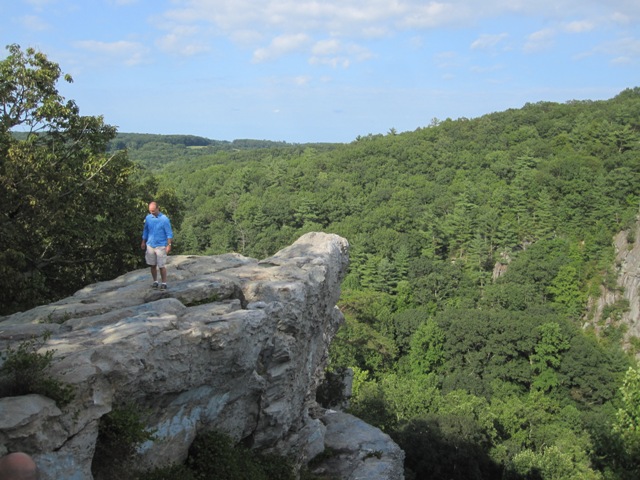 *No one was harmed in the making of this post. Except some lemons.

18 Responses to King and Queen Seat