I can cross something off my list! I rode a helicopter yesterday!

We took a flight from Kahului to Molokai. It was amazing. I was a little freaked out the whole time, and I got a little airsick, but I didn’t throw up or cry, so I will call it a success. I will tell about the ride using pictures.

The helicopter held five passengers. Lloyd, Samith, Curt, and I sat in the back. A couple from Chattanooga were in the front with the pilot. The helicopter was loud as we got into it, but we didn’t have to duck. The blades are 9.5 feet off the ground. Headphones kept things quiet while we were riding. 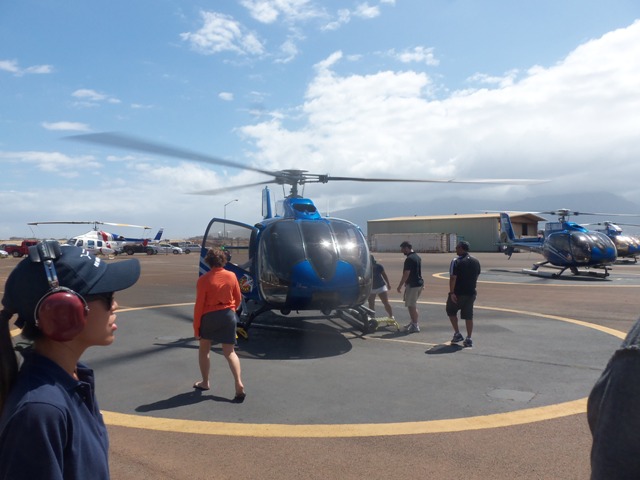 Lloyd and Samith getting in.

We were snug together in the back seat. 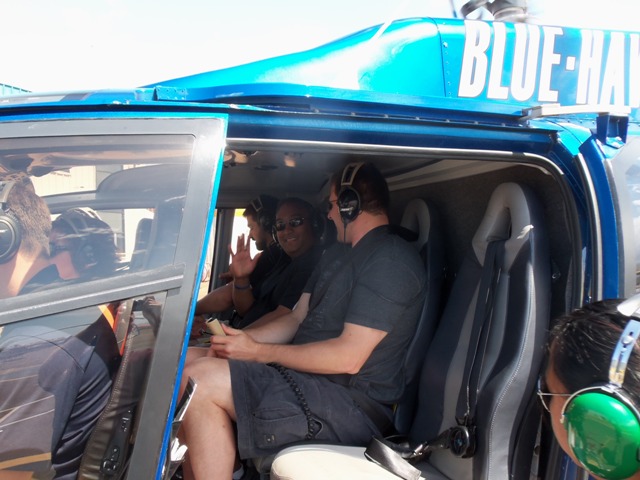 Our seats were assigned to us.

I was kind of scared when I first got in. The pilot had a really calm demeanor, which helped a lot, but it was still kind of freaky. The pilot played music while we flew. It included movie soundtracks. The music helped calm me too. 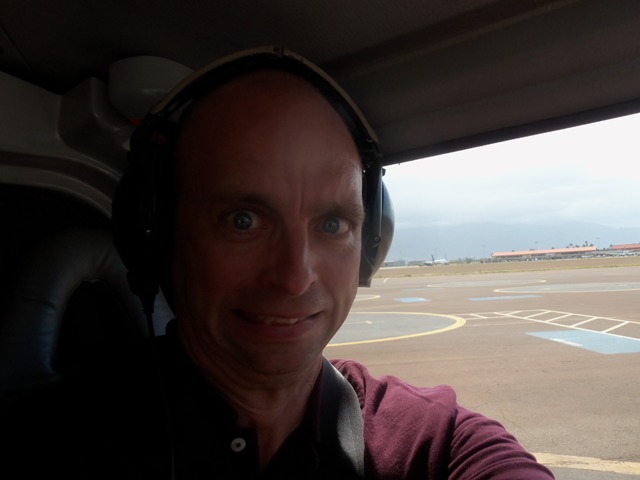 The face of fear.

The views were really very cool. We started by flying past Kahului. I recognized many landmarks. 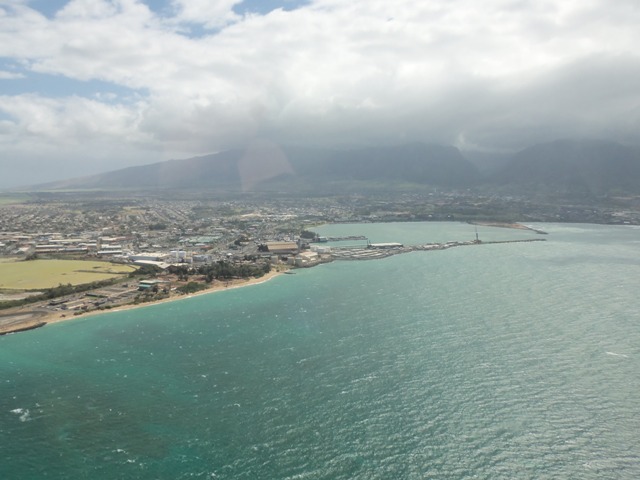 We were out over the ocean.

After stopping to look at Waihe’e Valley, we flew past the Lahaina area. We could see coffee farms. Cool! 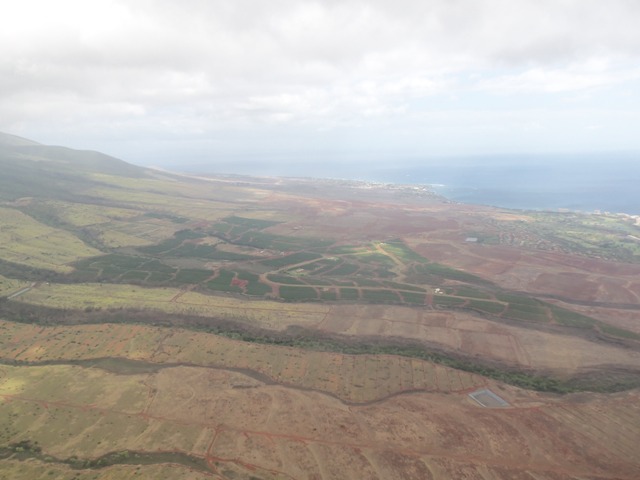 Next, we flew over the ocean to Molokai. I have really wanted to visit Molokai because of the story of Father Damien. I didn’t make it on foot, but at least I got to see it from the air. I sat right behind the pilot, so I could see how calm and steady he was while flying. It really helped. 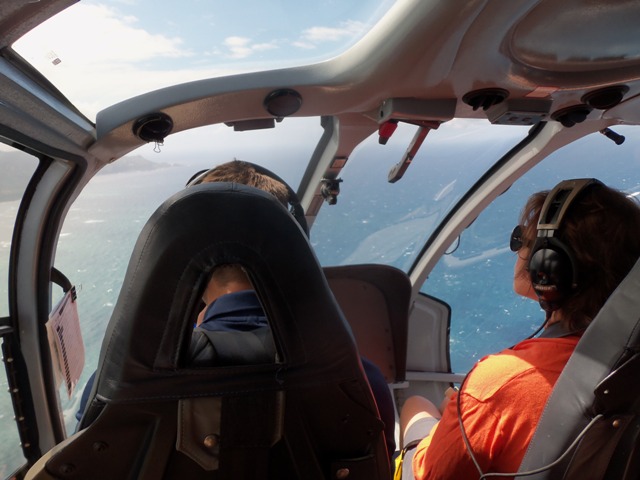 He was a former military pilot.

We hovered next to several waterfall sites. I am glad we got to feel what hovering was like. It was amazing and scary at the same time. 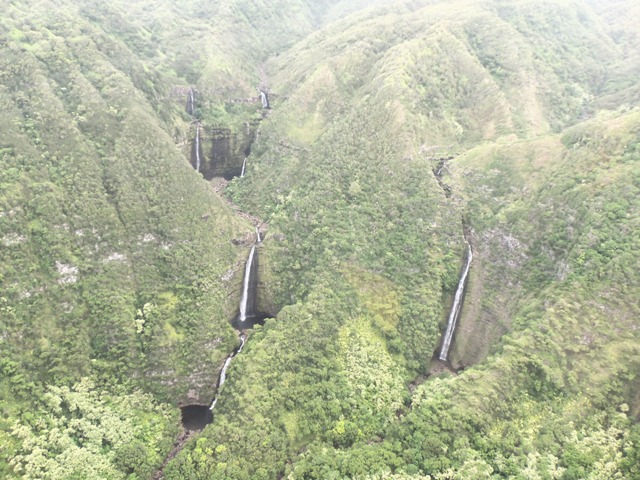 We also hovered next to some cliffs at Molokai. From our vantage point, I kept thinking that it all looked like model train set landscapes. 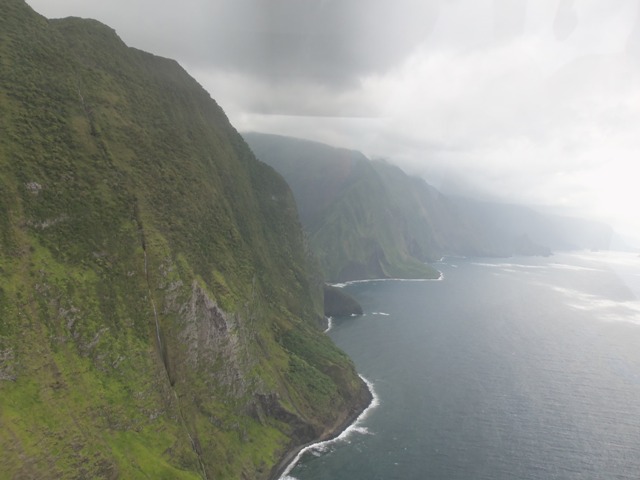 A long time ago, a giant tsunami broke off chunks from this side of the island.

On our way back, I saw our shadow. I tried to take a picture of it. 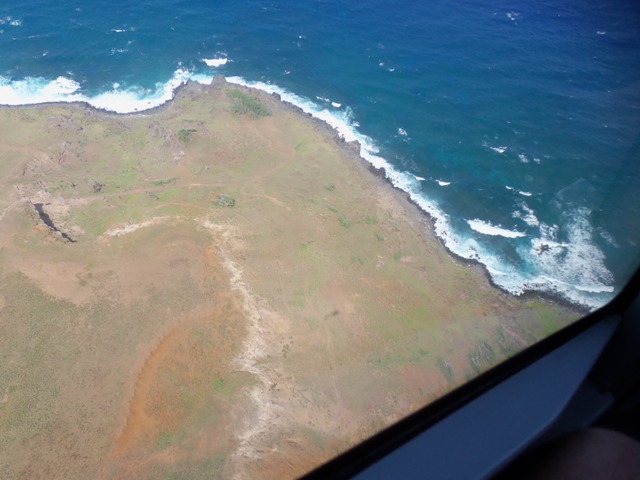 It’s sort of in the middle of the picture.

We made it back with no incident, except a couple of times where the pilot did nose-dives on purpose. They scared me a LOT, but I’m glad I got to feel what that maneuver felt like. His calm voice and his nice soundtrack kept me from freaking out or throwing up. 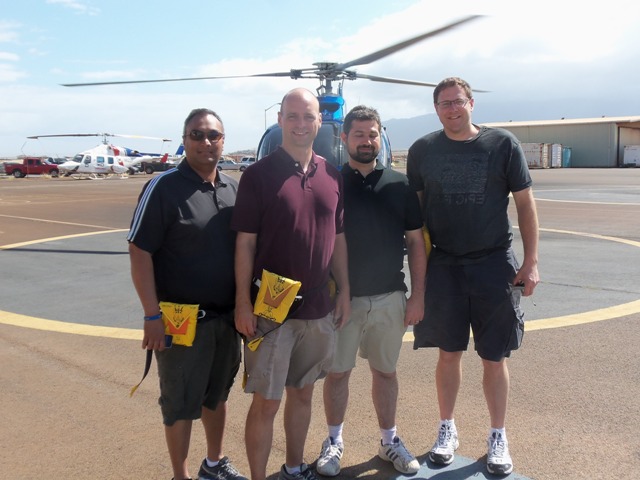 I am so glad I got to experience this. My curiosity is satisfied. Though I will not seek out another helicopter ride, I would not shrink away from doing it again. But maybe next time I’ll take some Dramamine.