Yesterday I spent the day at the courthouse in downtown Baltimore. I was one of 1000 people who had been summoned (summonsed?) to appear as a potential juror for a trial. Because things were so crowded, I ended up spending most of the morning in an overflow room instead of being in my favorite room, The Quiet Room. I like the quiet room because it has tables in it, and I can grade papers or do other schoolwork more easily. I was finally checked in at 11:30, at which time I went to the quiet room. After working for about an hour, I was interrupted by the announcement that it was time for lunch. An hour and a half lunch. Yesterday’s temperature was 68 degrees, so I walked to the Inner Harbor and had a lovely lunch of mall pizza.

After lunch, I sat until 3:20. I was sure the next announcement would be that I could go home. But it wasn’t. I was called into a courtroom with about 80 other people. It was a crazy-lot of them. Finally at 6pm, all the question asking was done, and the selection process was over. And I was chosen to be a juror at this trial. Of course, I won’t be saying anything about it, because you’re not supposed to, but how cool is that?

Whew! I have YouthQuake to go to this weekend. 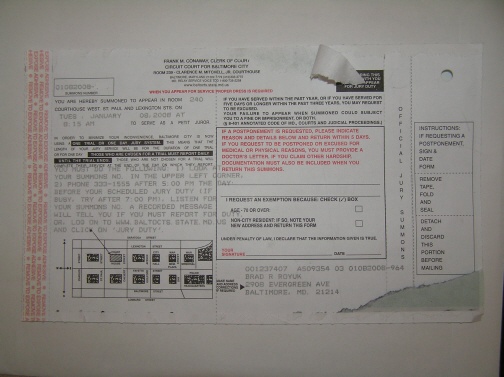