Choosing between Less and Less

I have been stopping at Burger King for quick dinners because it’s on my route home. I like to have two cheeseburgers and a small Coke. The first time I ordered that, the person in the drive through told me it was cheaper to get a meal deal. It’s the same thing I wanted to order, but it also includes fries. Ever since then, I’ve been getting the two cheeseburger meal deal and just eating the fries that I don’t want.

Last night on my way home from school, I stopped and ordered the meal deal. I decided to try something: I asked if they could charge me for the meal deal, but not give me the fries. The person in the drive-through was confused.

“You don’t want fries?” she asked. Then she typed in the two cheeseburgers and small Coke. My bill went up $1.29. When I got to the window, I asked if she could change it back to the meal deal. I don’t want to just throw away perfectly good fries, but I really don’t want to pay $1.29 to get less food.

There was a long pause before she brought my food out to me. I apologized for the confusion and trouble I caused. Next time I’ll just order the meal and throw the fries away.

Then I looked inside the bag: 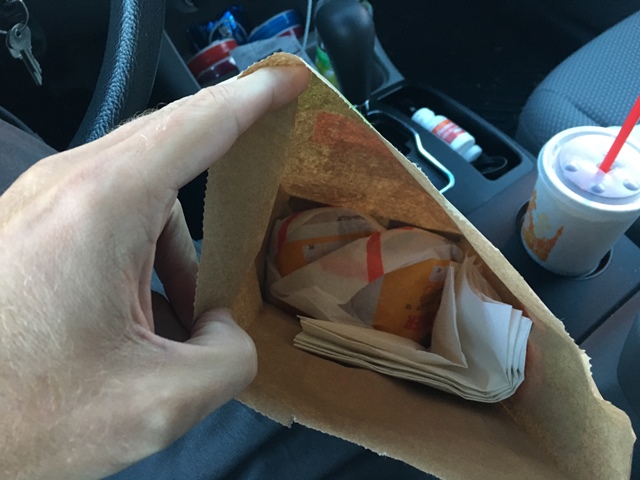 There were no fries! She took them out! Yay! I still think I won’t make this request again. It caused too much trouble and confusion. But how sweet of her to fulfill my request…