My friend Mike Weider is in town. He used to teach at school with me, but moved away six years ago. After living in St. Louis for a while, he and his family moved to Indonesia. His school has sent him to a conference which just so happens to be in Baltimore. Awesome! I’ll use his visit as an opportunity to add and advertise a new link to their web page in the right-hand column. –>

Yesterday we got together. He needed to accomplish two things: 1) His wife gave him a list of items to get from Target. 2) He dearly wanted to eat a crab pretzel from Silver Spring Mining Company Restaurant.

The restaurant experience was all he expected it to be. I told him he could close his eyes while he chewed his first bites of pretzel. I always do that when I’m eating something really good. I think shutting out all visual input lets you focus on the flavor of the food better.

The trip to Target was fun. He had to get some toys for Christmas, some onesies for his large 18 month old, some dragonfly towels for the bathroom, and some sloppy joe seasoning packets. Between Target and a later stop at Walmart, we were successful on all counts, except the dragonfly towels. We didn’t see those anywhere.

While in the toy department, I saw a bizarre item: A Barbie Advent calendar. It actually said “Advent” on the package. It seemed strange to me. Were they really using a Christian liturgical term to sell a product? What’s next? Barbie’s Ash Wednesday beauty kit? Barbie’s Pentecost dress? 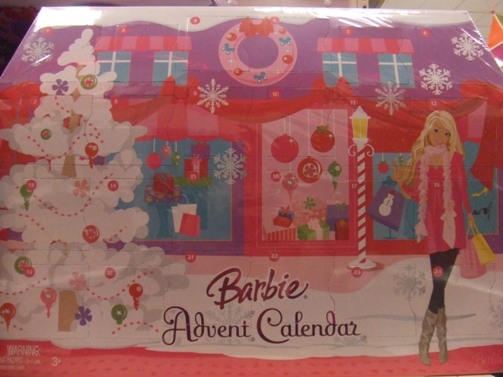