Tom and Debbie invited me to go out on their boat yesterday. It was nice of them to invite me. We got into their truck and pulled the boat to the launch point. They were old hands at getting the boat into the water. I mostly just stood and held a rope, but I think I did a good job of holding it.

Something was wrong with the ignition system – the boat wouldn’t start. Dang. We were disappointed. But at least the problem showed itself before we got out, instead of waiting until we were 11 miles away from the truck.

On the way back to Tom and Debbie’s, we stopped at a produce stand. Debbie said this stand usually has good stuff for good prices. She was right. For $3.50, I got a bunch of green beans and an eggplant. Nice. Debbie got some apples. We went back to their place and had lunch on their deck. It turned out to be a nice day in spite of the boat not starting. Good food, good company. Except a honey bee wouldn’t leave me alone, stupid bully bee.

Before I left, Debbie gave me some of her apples. She also had some tangerines that she said might be good candidates for eating whole. With her additions, my fresh produce became beautifully colorful: 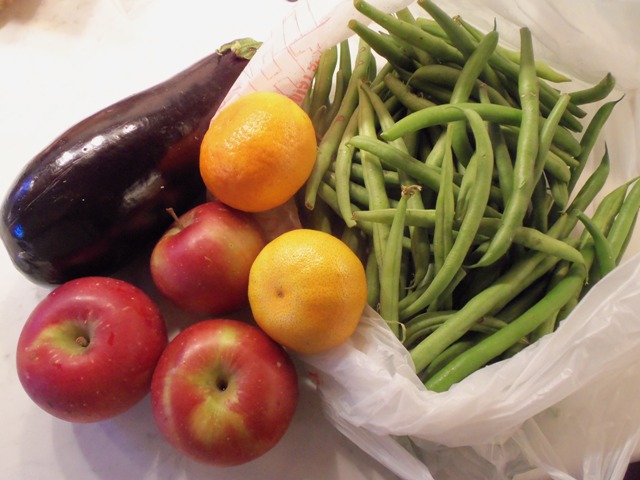 Thanks, Tom and Debbie. Maybe we can get that boat going another time, but it was still a fun visit.