In the back of my mind, I was kind of thinking I’d go to New York for another haircut during Spring Break. As the week wore on, it became apparent I wouldn’t be going. I certainly couldn’t wait any longer to get my hair cut, so I decided to do it here in Baltimore.

Denis has recently discovered a barber he likes. Her name is Ning. She is Filipino. Not having any other leads, I decided to go to her. I think why I like the guy in New York is that he doesn’t listen to me. He just cuts my hair the way he thinks it’ll look good. When I sat down in Ning’s chair, she said, “So we’ll just use the clippers to clean up the sides and back?” And I said, “No. Don’t take too much off.” She ended up just trimming a little with the scissors. I ended up being disappointed. I wanted to come away with something really different looking. All I got was the same thing, only neater. And it was my own stupid fault.

Next time I get my hair cut, I will say, “Give me a haircut. Do whatever you think will look good.” If nothing else, it’ll make for exciting lunchtime conversation at school. 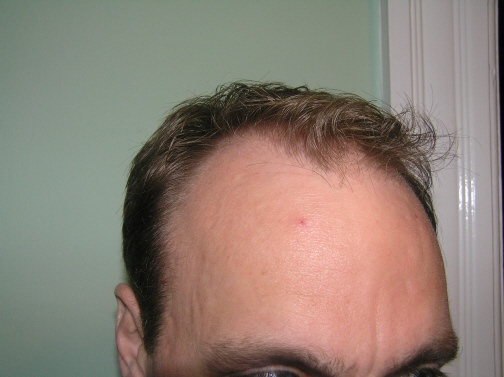 I’m in the middle of a four-day weekend. I think it’s being called “Winter Break” or something. I didn’t want four whole days to pass without doing something unusual, and getting caught up on schoolwork was definitely out.

I decided to get a hotel through Priceline and stay overnight. It really was all about the hotel. I LOVE staying in hotels. At first I was going to do Baltimore, but then I thought maybe I should stay in Washington DC. Then I thought, why not New York? Priceline has you choose an area within the city you’re considering. In selecting a specific location, Times Square was a recognizeable area. I mean, I’ve heard of the “Upper East Side”, but I don’t really know what that means. So Times Square it was. A $100 offer was immediately accepted.

I talked Denis into stopping studying for a while so he could come with me. He is, after all, my New York sherpa-guide. He even knows what “Upper East Side” means.

The hotel was the Crowne Plaza Times Square. It was awesome! It was right in the middle of everything, and was clean and gorgeous. The only drawback was frighteningly fast elevators. I kept thinking we’d shoot through the roof or something.

In the picture below, the brown awning over the trees covered with lights is the Crowne Plaza. There was a Hershey store right next door (see the Twizzler sign) and an M&M store across the street. 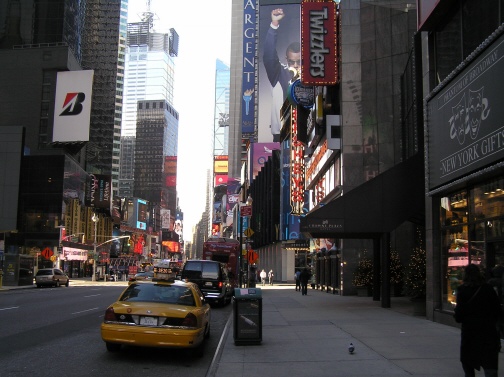 Since we were right on Broadway, we went to that place where you can stand in line to get cheap theater tickets. I had seen a sign on a bus advertising a show called “Curtains” that had David Hyde-Pierce in it, so we got tickets for that. At half price. Awesome!

The show was great! We were like 30 yards away from the stage. It was really funny and very entertaining. I loved the dance numbers. Very complicated. 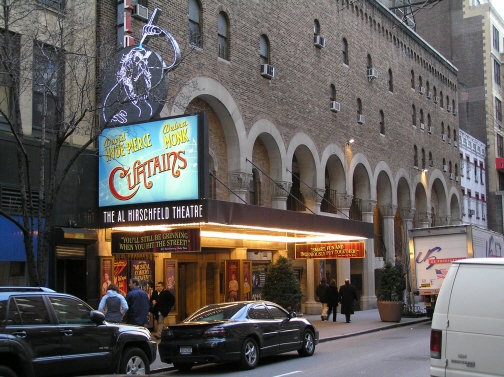 And since I was in New York, I went back to the place I had gotten my hair cut at Thanksgiving. The same guy cut my hair. I was SO much more confident in his skills than in the mall chick from my last haircut. He ended up cutting off quite a bit of hair, but he was doing something specific, so I didn’t mind so much. He styled it kind of forward like Julius Caesar hair. What I really liked was the curl in the front. I thought it was hilarious. It was too bad that I did this on the way out of town. I didn’t get to show it off much. 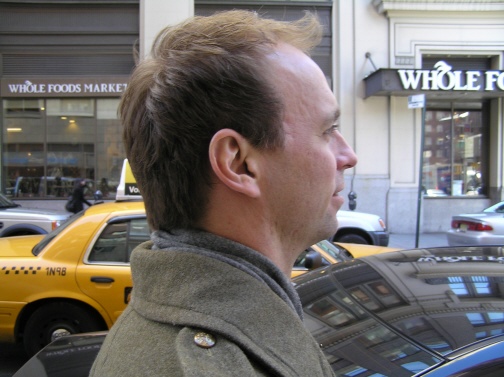 And in perhaps an interesting bit of irony, my only souvenir was a mug. But I had to get it, because I am drinking coffee with some regularity now, and I’ve been using a regular-sized mug, which is just too small. And it’s an Oreo trivia mug, so it’s kind of boring-looking. The mug I got is GIANT! It holds 18 ounces. AND it’s a Superman mug! 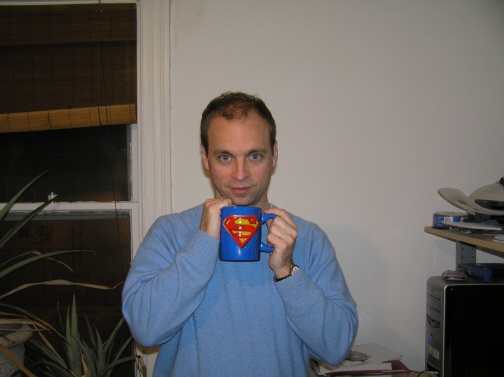 So all-told, I spent about two hundred dollars. And all I have to show for it is a mug and a haircut.

…I think I’ll do this again next month. Hehe!

So my hair isn’t looking like Alton Brown’s. I am either too chicken to do it, or my hair just won’t do what his does. I’m not sure which. I try to make it all stand straight up when I’m styling it in the morning, but by the time I’m done, it just doesn’t seem to look like Alton.

So I’m looking ahead to the future. I’m pretty sure I’ll buzz cut it again in the summer. But in the meantime, do I keep growing it out? If so, should it be long all over, or just on top? There are some pretty interesting hair styles out there. I could try the Einstein thing, though his hair isn’t quite the same as mine. All the news of Heath Ledger has put pictures of him up all over the place. His hair does look an awful lot like mine in color and texture… could I have Heath hair? 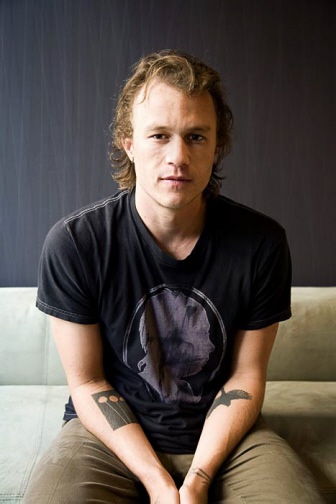 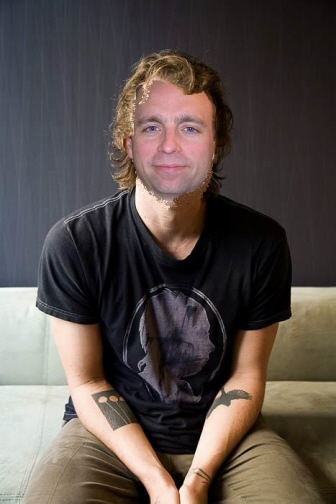 It’s Been a Long Time

I went to a barber yesterday. Actually, it was a salon or whatever. I thought I should go to a fancy place because I wasn’t exactly sure what I wanted and I thought maybe the hairdresser person could help. She couldn’t.

I went to a place in White Marsh Mall. I didn’t really know what I was asking for, so I said stuff like “just a trim” and “clean it up” and “make it neat”. When I first sat in her barber chair she asked me how I wore my hair. I was a little confused. I pointed at my head and said, “Like this.” Then she scared me with talk of cutting a lot off. I reiterated my desire just to have my neck shaved and my sideburns trimmed.

She did know who Alton Brown was. She said she watched Food Network all the time. But she said she didn’t notice what his hair looked like. I was scared again because hair is her business, right? My career as a teacher continuously colors my observations of the world. Shouldn’t she always notice peoples’ hair?

In the end, she cut off about a centimeter of hair. I figure that’s a couple weeks of growth, but at least I don’t have a hairy neck any more. She didn’t trim my sideburns much, so they’re going to be crazy-long in another couple of weeks. I don’t think I’ll go back to her then. 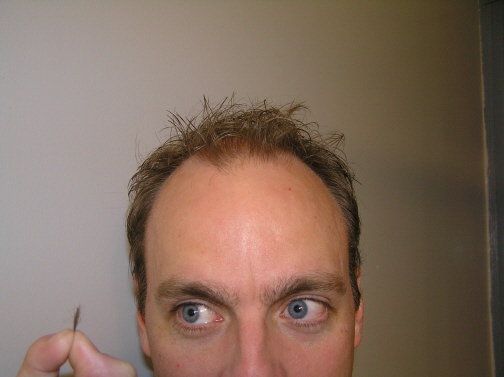 I think my hair is the longest it’s been since college. That was what, three years ago? Heh. Looking back on my “haircut” category, I see my last trim was November 25. The cut before that was October 24. But my last serious haircut was August 20. Five months ago.

I continue to have days where I like my crazy-long hair, and days where I hate it. I think if I am able to keep this up, it won’t last beyond the school year. Alton Brown hair is not something a real person has, but something a character has. So I can be “crazy-hair teacher man” with a hairstyle like this, but I don’t think I can be “guy at the mall” with hair like this.

In the meantime, I LOVE the back. I can touch my soft, luxurious hair anytime I want. It’s so nice. I find myself running my fingers through it even while I’m teaching. So soft… 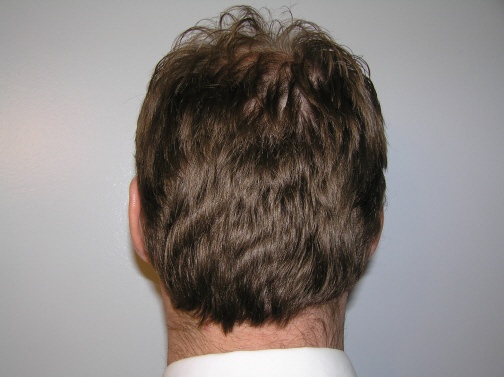 For comparison, here is my August 20 picture.